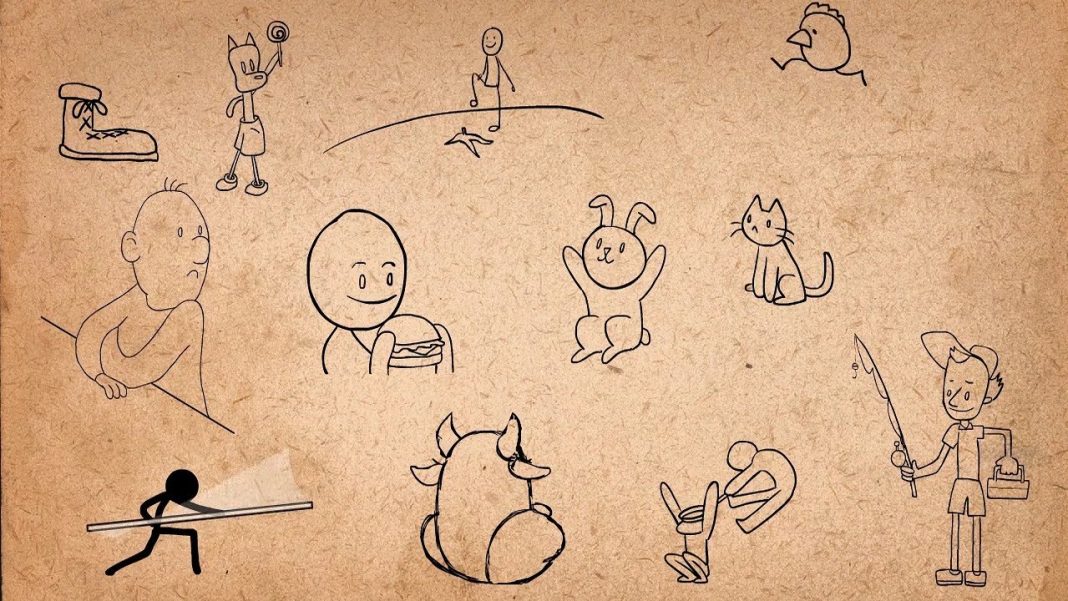 The first animated film was Humorous Phases of Funny Faces. It was made in 1906 by J. Stuart Blackton, an American newspaper illustrator. Blackton filmed a series of faces that had been drawn on a blackboard. He also used a variety of other techniques. Another early animated film was Gertie the Dinosaur. It was created by the American cartoonist Winsor McCay in 1914. In this film, for the first time, a character drawn of lines seemed to live, breathe, and display a personality on the screen.

Audiences liked these animated cartoons. Soon many American film studios were producing animated films. These were shown in movie theaters before the feature films. The Pat Sullivan studio produced one of the most famous characters of the silent-film era, Felix the Cat. The Fleischer studio produced cartoons featuring the character KoKo the Clown. It later created Betty Boop, Popeye, and Superman cartoons.

The first successful animated cartoon with sound was Steamboat Willie (1928). It introduced the character Mickey Mouse. This film was produced by Walt Disney, who was to become the most famous American producer of animated films. Disney’s series of Mickey Mouse cartoons, and another series called Silly Symphonies, were very popular with audiences.

The success of his early cartoons enabled Disney to launch an ambitious training program for his artists. They studied anatomy, drawing, acting, and motion to improve their animation. The results of this training can be seen in Disney’s Snow White and the Seven Dwarfs (1937). It was the first feature-length animated film made in the United States. Other important Disney films followed. These included Pinocchio (1940), Fantasia (1940), Dumbo (1941), and Bambi (1942).

By the end of World War II (1939-45), leadership in the field of animation had passed to two major film studios—Metro-Goldwyn-Mayer (MGM) and Warner Brothers. At MGM, William Hanna and Joseph Barbera made cartoons featuring Tom and Jerry, a cat and a mouse. Warner Brothers cartoons were directed by Tex Avery, Chuck Jones, and Friz Freleng. They starred Bugs Bunny, Daffy Duck, and many other characters. During the 1950’s, United Productions of America (UPA) introduced a flat, modernistic drawing style in cartoons. These featured Gerald McBoing-Boing and Mr. Magoo.

During the 1960’s, television networks began broadcasting children’s cartoons on Saturday mornings. Some cartoons were shown in the evenings. The most successful television animation studio was Hanna-Barbera. It introduced the Flintstones, the Jetsons, Yogi Bear, and hundreds of other characters.

Beginning in the 1980’s, animated films became popular again. The Disney studio produced such modern classics as The Little Mermaid (1989) and The Lion King (1994). Computer animation created the remarkably realistic dinosaurs of Jurassic Park (1993). It also made barnyard animals appear to speak in Babe (1995). Toy Story (1995) was the first of many feature-length films made entirely with computer animation. A distinctive style of animation from Japan, known as anime, has become highly influential. Japanese animators have expanded upon traditional animation techniques to create films that are commercially successful and artistically sophisticated. These include Pokemon (1999) and Spirited Away (2001). And animated television shows such as The Simpsons (1989- ) and SpongeBob Squarepants (1999- ) are as popular with adults as with children.

Future Of Animation With AI