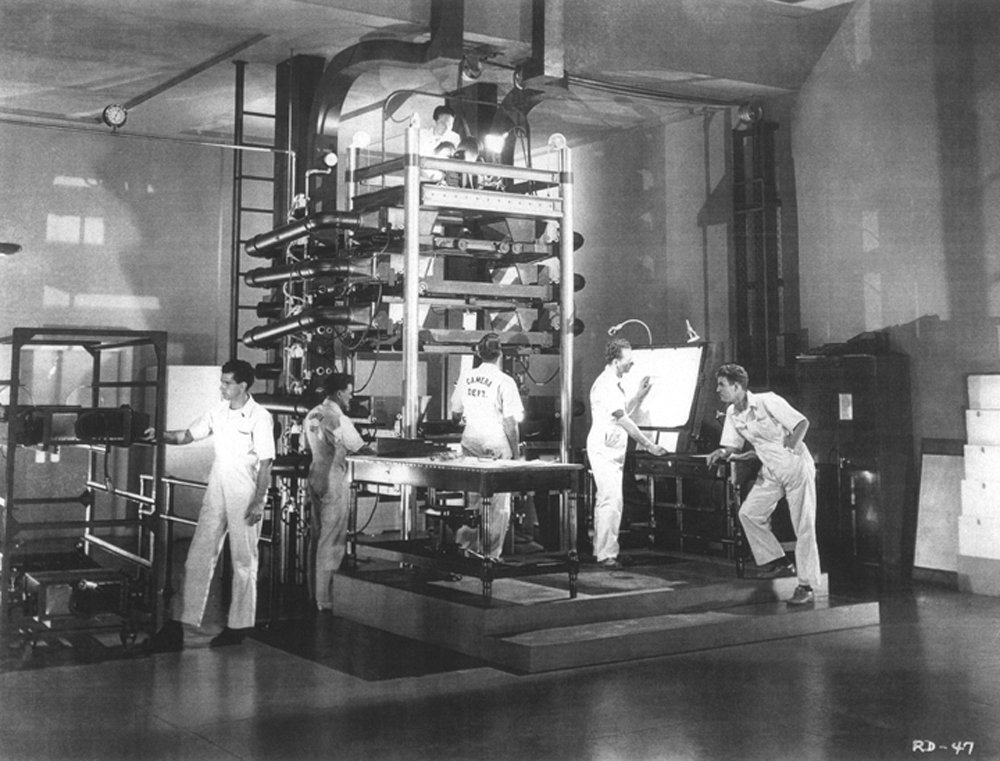 Walt Disney’s Multiplane Camera, invented in 1937 for Walt Disney Studios by William Garity, was an incredible piece of technology that helped create the illusion of depth in animated motion pictures.

Disney wanted to increase the eye value of the many paintings making up a picture by achieving a soft-focus effect on the backgrounds, illuminating the various levels of each scene individually, and separating” background from foreground, thus keeping background objects to their proper relative size.

His production crew laboured for three years to perfect the novel picture-taking device to achieve these results. It consists of four vertical steel posts, each carrying a rack along which as many as eight carriages may be shifted both horizontally and vertically. On each carriage rides a frame containing a sheet of celluloid, on which is painted part of the action or background.

Resembling a printing press, the camera stands eleven feet tall and is six feet square. Made with almost micrometre precision, it permits the photographing of foreground and background cels accurately, even when the first is held firmly in place two feet from the lens and the lowest rests in its frame nine feet away. Where the script calls for the camera to “truck up” for a close-up, the lens actually remains stationary, while the various cells are moved upward. By this means, houses, trees, the moon, and any other background features, retain their relative sizes.

When everything is ready for action, an operator takes his place at each level of the camera, adjusting the cel, lowering or raising it, top-lighting or back-lighting his part of the scene as required. Also, by moving all cels except those on which the characters are painted across-camera at the same speed, the illusion of distance is created. An interesting variation is to have the background and foreground move in opposite directions. This creates an effect of rotation. An early example is a scene in Walt Disney‘s Snow White and the Seven Dwarfs where the Evil Queen drinks her potion, and the surroundings appear to spin around her.

You may also like to read: How a German fairy tale Releases as Snow White and the Seven Dwarfs in 1937