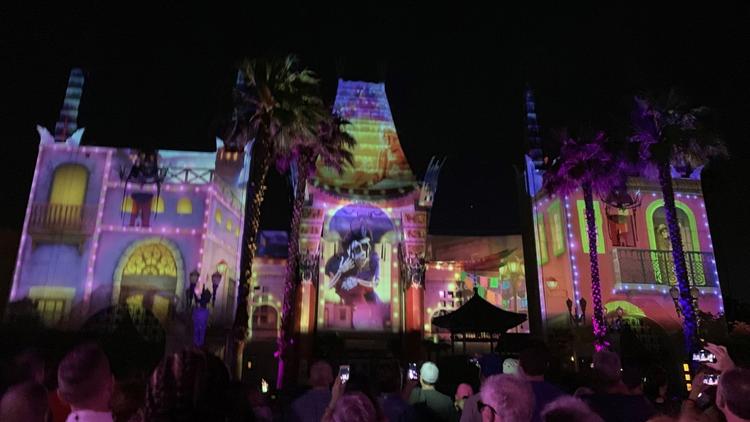 Disney World’s latest projection show has everything and the animated kitchen sink in it. The new “Wonderful World of Animation” production at Disney’s Hollywood Studios theme park incorporates every animated theatrical release, including the upcoming “Toy Story 4.”

This allows “The Lion King” and “The Incredibles” to share space seamlessly with “Great Mouse Detective” and “Black Cauldron.” My inner Mowgli was happy to see snippets of “The Jungle Book.”

“That was the point: We want people to see their favorite films,” said Tony Giordano, show director.

The images – starting in black and white and featuring “Steamboat Willie” – are projected onto the park’s Chinese Theater façade. The show debuted Wednesday night during the 30th anniversary celebration of Disney’s Hollywood Studios.

The focal point is usually in the center of the theater, spreading out to the sides. The midsection frequently is architectural – especially for scenes inspired by “Coco,” “Frozen” and “The Incredibles” – with additional animation panels on the flanks. Sometimes the far reaches are the same clips; sometimes they are radically different.

It’s a lot of cinema to absorb.

“Every time I watch it, I notice something new,” Giordano said.

The 12-minute show is divided into themes such as adventure, romance, villains and magic. And there’s Disney mash-up magic throughout. For instance, visitors hear the waltz-like “Once Upon a Dream” from “Sleeping Beauty” while watching Wall-E and Eve spin around. Lady and Tramp and Tarzan and Jane and Hercules and Meg and others are nearby.

“I think that’s the fun of the show,” Giordano said.

The “Dream” song lurks beneath the following romance tunes, “Kiss the Girl” from “The Little Mermaid” and the title song from “Beauty and the Beast.” It’s the same orchestration, Giordano said.

There are musical contrasts, also.

The visuals are enhanced by pyrotechnics and lighting tricks. At one point, the building is transformed into the “Snow White and the Seven Dwarfs” pipe organ.

“If you notice, smoke shoots out of the building,” Giordano said.

There’s a film for every age guest, even the ones who grew up in a slower time for animation.

“The renaissance really started with ‘Little Mermaid up to ‘Beauty and the Beast,” Giordano said. “So to take these films that don’t get a lot of love and focus on them was awesome.”

Alike: In a busy life, Copi is a dad who attempts to show the...