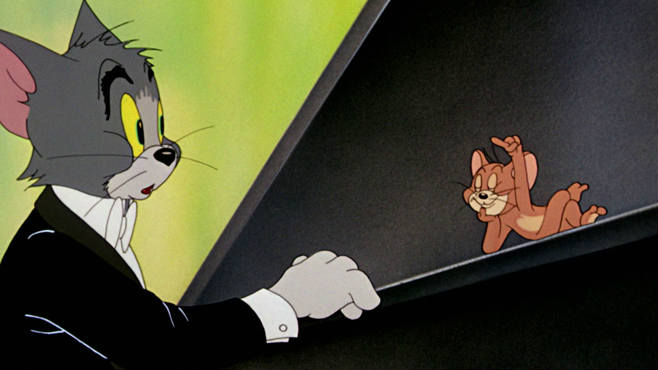 Hi Friends, We must be happy before talk about tom of tom and jerry in his movie The Cat Concerto.

The Cat Concerto is a 1947 American one-reel animated cartoon and is the 29th Tom and Jerry short, released to theatres on April 26, 1947. It was produced by Fred Quimby and directed by William Hanna and Joseph Barbera, with musical supervision by Scott Bradley, and animation by Kenneth Muse, Ed Barge and Irven Spence and additional animation by Richard Bickenbach.

In a formal concert, Tom, in a tuxedo, is giving a piano recital of “Hungarian Rhapsody No. 2” by Franz Liszt. Jerry, who is sleeping inside the piano, is rudely awakened by the felts, then sits on top of the piano to mock the cat by “conducting” him. Tom flicks Jerry off the piano and continues playing.

Jerry arises from under one of the keys. Tom plays tremolo on this key, hammering Jerry’s head with it, and then unsuccessfully tries to smash the mouse beneath the keys. As the main theme of the rhapsody’s Lassan section sets in, and when Tom lifts his two fingers from playing a trill, the piano continues playing by itself, with Jerry manipulating the felts from inside.

To quiet him, Tom whacks Jerry with a tuning tool. In retaliation, Jerry slams the piano keyboard lid onto Tom’s fingers and then pops out on the far right of the piano to attempt to cut Tom’s finger with a pair of scissors as he plays a very high note as the rhapsody transitions to its Friska section. After six misses, Jerry substitutes a mousetrap for the white keys just below it. Tom plays the keys on either side for a few seconds, but eventually, his finger gets caught in the trap.

Wanna know more about so please watch the movie. fun is guaranteed.